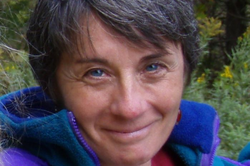 This is her story.

I developed asthma as a child. I seemed to “grow out of it” only to have a resurgence at the age of 30. A steady decline in my health resulted in work absenteeism, allergies, poor sleep and chronic colds. In 1997, I went from using reliever medication occasionally to frequently. During a weekend in May, my chest felt constantly tight and by Monday morning, I was using my puffer every 2 hours. A friend called to see how I was doing, but I had no breath to answer.

Two hours later, as I recovered from a shot of adrenaline, the doctor informed me that I had nearly died from Status Asthmaticus. I left the hospital two weeks later, laden with prescriptions for Prednisone, inhaled steroids and relievers. Worried about side effects, I discussed my condition with my respirologist who said, “You’re alive, aren’t you? Take it or leave it.” I was determined to leave it.

After minimal improvement from dietary change, yoga, acupuncture and Chinese medicine, I found Buteyko through the famous 1998 BBC program QED with Alexander Stalmatski, Dr Buteyko's #1 associate in the West. I travelled to the UK to do the course with him in 1999. Alexandre Stalmatski  introduced Buteyko to the West by taking it first to Australia and then to the UK. He wrote the first two books in English on Buteyko called “Freedom From Asthma” and “Freedom From Insomnia”

At first, I was disappointed. I was not improving. But my fellow classmates encouraged me to stick with it and after a few weeks, I started seeing change. Symptoms disappeared. Colds and flu disappeared. Inflammation disappeared. Allergies disappeared. Sleepless nights disappeared! Fatigue disappeared! I was thrilled. After such spectacular improvement, I decided on a career change and became a Buteyko Breathing Educator with Jennifer Stark in New Zealand. As I have a Masters in Teaching, I felt I was well-suited to my new career. At that time, there were no Canadians teaching Buteyko in Canada.I began teaching and found great inspiration and excitement in the improvement I was seeing in my clients. I love my work!

In 2004, I was fortunate enough to be a clinician for the first North American medical research trial on Buteyko and asthma at Foothills Hospital in Calgary, Alberta. $1 million was donated for the trial by a wealthy Alberta family whose son experienced great benefit from Buteyko for serious asthma.  You can listen to this Radio program from 2005 with Dr Robert Cowie, the main researcher. You can read about the results from that trial here.

Some time after this ground-breaking event,  it became clear that North America needed its own professional organization. I had been a member of the Buteyko Institute of Breathing and Health, headquartered in Australia. But, as Buteyko educator numbers were growing here, momentum was building. Buteyko educators found each other and we started telephone meetings, planning and organizing. We had our inaugural conference in 2009 in California and in 2010, we were established. I was pleased to be accepted as the president and still hold that position today.

When I began my work in Buteyko, I was determined that there should be Buteyko educators in every province of Canada. So many people - everyone! - could benefit from improving their breathing. After almost 15 years, there are now 35 educators in 8 provinces and one in the Yukon Territory. In the next 15 years, I am determined that Buteyko becomes a household word and available to everyone and anyone who needs it. Given that my health is better in my 50s than it was in my 40s, I feel I have the energy and inspiration to make it so.

For a complete list of qualified Buteyko Educators in North America, please go to www.buteykoeducators.org
For qualified educators in Australia and New Zealand, go to http://www.buteyko.info/